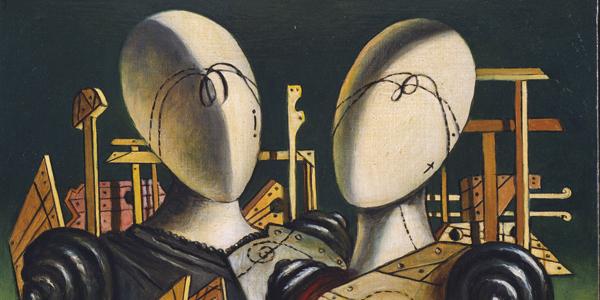 A hundred years after their creation, the metaphysical masterpieces that De Chirico painted between 1915 and 1918 return to Ferrara, the city of the Estense. In Italy, during World War I, the author is struck by the contrast
between the beauty and the renaissance myths of the Emilian city and the irrationality of the world around him, from which he draws inspiration. Again in Ferrara, in 1917, De Chirico met Carlo Carrà, at the Villa of the Seminary,
the military psychiatric hospital for treatment of neuroses of war, where both were hospitalized. Through this encounter was born an intense philosophical and artistic partnership that inspired De Chirico to define his painting as
“metaphysical“.

De Chirico was the brilliant inventor of metaphysical painting, one of the most important artistic trends in the modern period, in which the mysteries that permeate existence take form through suspenseful atmospheres plunged in disquiet. De Chirico’s work shifted radically with his arrival in Ferrara in 1915, when, following the outbreak of World War I, he left Paris for three and a half years of military duty in Ferrara. Swept up in the beauty and renaissance myths of the Emilian city, De Chirico painted a surreal world filled with wonders: timeless city squares invaded by fantastic sunsets or secret rooms with dizzying perspectives act as backdrops to the enigmatic objects discovered on his walks through the narrow streets of the Ferrarese ghetto, or they become the stage for tailors’ mannequins and silent faceless characters. Ferrara was the place where the artist met Carlo Carrà and began calling his painting “metaphysical,” and it was the birthplace of the paintings—true emblems of modernity—that exercised a profound influence both on the Italian art of the time and on international movements like Dada, surrealism, and the New Objectivity.
For the centenary of De Chirico’s arrival in the city of Ferrara, Palazzo dei Diamanti will celebrate this vital moment in the story of 20th century art with a large exhibition. An large proportion of paintings created by De Chirico during the Ferrara period will be complemented by metaphysical-inspired paintings by artists such as Carlo Carrà, Giorgio Morandi, and Filippo de Pisis, as well as masterpieces by some of the greatest artists of the European avant-gardes, from Raoul Hausmann to George Grosz and from René Magritte to Salvador Dalí to Max Ernst, all of whom were fascinated with his unique style and ability to reveal the impenetrable mystery of things on canvas.

The Carlo Bilotti Museum’s permanent collection consists of the gift of 23 works donated by the entrepreneur Carlo Bilotti to the City of Rome, including paintings, drawings and sculptures. The most coherent and central group is made up of 18 works by Giorgio de Chirico (Volos 1888-Rome 1978), of which 17 are displayed in this room and one, a sculpture of Hector and Andromache, is installed outside the Museum. The collection also contains the portraits of Andy Warhol’s Tina and Lisa Bilotti, 1981 Larry Rivers’ Carlo with Dubuffet on the background, 1994, Mimmo Rotella’s Carlo and Tina Bilotti, 1968. Completing the original nucleus of the collection Summer, 1951, by Gino Severini and Cardinal, 1965, by Giacomo Manzu. In this first group have been added in recent years works Consagra, Dynys, Greenfield-Sanders and Pucci. 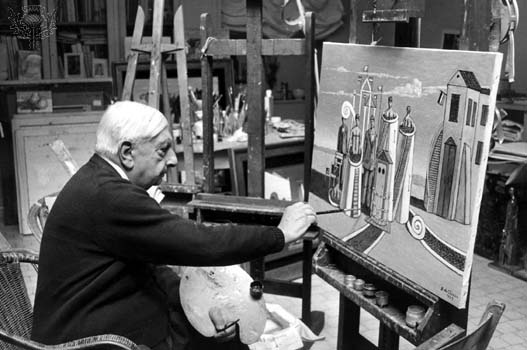 The De Chirico works on display are representative of the most famous themes produced by the artist from the second half of the Twenties until the Seventies. Themes such as the Archaeologists, the Horses on the River Bank, the Furniture in the Valley or the Room, the Knights or Ancient Warriors, all arose from a happy period of creativity and international recognition, following the years of the first Metaphysical period. In addition to the themes listed above, which appear in the museum in such masterly works as The Mysterious Archaeologists of 1926 and the Furniture in the Room of 1927, other particularly notable pictures on display include the delicate Back of a Naked Woman (about 1930), with which De Chirico, influenced by Renoir, returned to the genre of the female nude, Metaphysical Interior with Biscuits and Mystery and Melancholy of a Street. These last two are replicas, made by the artist in the Sixties, from his masterpieces of the first Metaphysical period. In his works from the Fifties, Self-portrait with the head of Minerva, in which De Chirico wears the dress of a Venetian painter, and Historic regatta in Venice, inspired by Canaletto, the artist declares the necessity of recovering the Italian pictorial tradition. 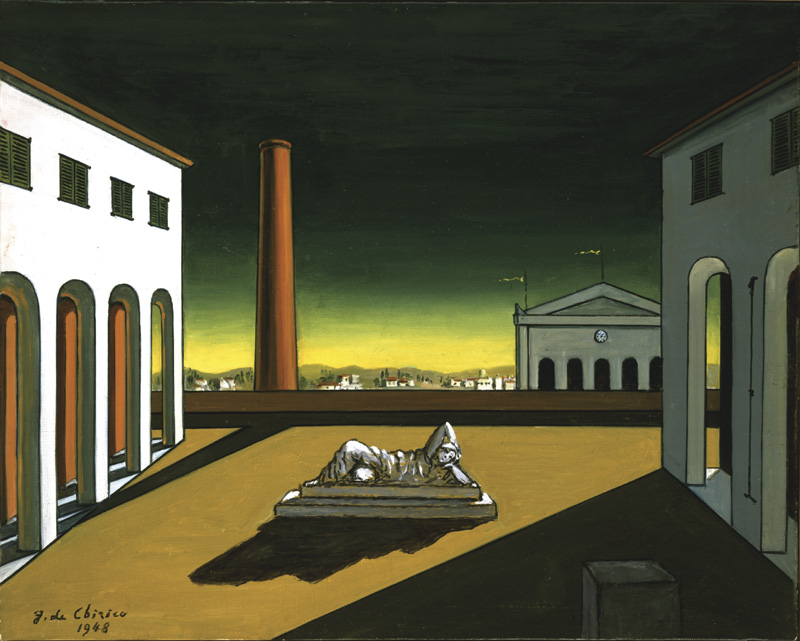 Severini’s neofuturistic work, Summer (1951), bears witness from another angle to the diverse threads of the Bilotti collection. The sorrowful woman, whose contours lose themselves in an almost abstract geometric structure, are part of a series of works dedicated to the theme of human activity as it is connected to the seasons, which the artist subsequently reworked for the Palace of Congress in EUR district in Rome.